What is Dry-Aged Steak?

Dry-aging is a process that involves hanging beef for several weeks to dry. During those two weeks, the moisture evaporates from the meat and it becomes more tender as the enzymes in the meat break down the tendons. Dry-aged beef can take a long time to make and is expensive, so it’s not generally offered in supermarkets and instead can be found in high-end steakhouses. Dry-aging is a highly controlled process in which both the moisture and bacteria are controlled in order to avoid the beef going bad during the aging process. Dry-aging can also be done using vacuum-sealed bags. This is a DIY version that allows people to dry-age their own beef at home.

Dry-aging is almost always done to beef, although it can also be done to pork. Red meats are the only meats eligible for the dry-aging process. Some of the meat has to be cut off, so larger cuts of meat are required.

Why Dry-Age a Steak?

Dry-aging a steak not only makes the meat more tender, but it also brings out more of the flavor of the steak. Dry-aged steak has a much more intense beef flavor (the longer it’s been dry-aged, the better) and has a different texture from regular steak. Many consider dry-aged beef to be the best-tasting of all types of steak, believing it to be worth the expense.

How Is Dry-Aged Steak Different from Other Steaks?

The type of steak purchased in the supermarket isn’t aged at all. There are other types of aging that are usually quicker – wet-aging takes a few days and involves vacuum-sealing the steak so that it doesn’t lose any moisture. Some chefs have experimented with quicker methods of dry-aging steaks that have simulated the effects of real dry-aging, but the result hasn’t quite been the same as real dry-aging.

Dry-aged steak is the most flavorful of all types of steaks. Its flavor is richer and beefier and the meat is more tender with a butterier texture. The steak will also take on a nutty, almost cheese-like aroma. 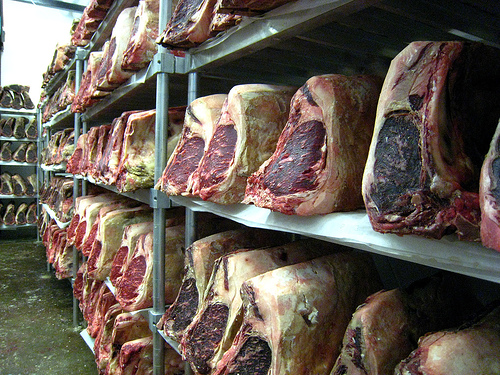 Before cooking, dry-aged beef will look darker than non-aged beef and will also be slightly concave due to the loss of moisture. After a certain period of aging (usually 45 days), the steak starts to develop a white crust, which is a combination of mold and salt. Most dry-aged steak is aged for up to 30 days and thus won’t have that white crust.

Dry-aged beef is no more or less healthy than any other steak. Anyone who needs to avoid red meat for health reasons would need to avoid all red meat, including dry-aged steak.

Dry-aged steak is typically more expensive than regular steak. The dry-aging process takes a long time. Therefore, most stores and restaurants don’t do it. Only higher-end steakhouses generally offer dry-aged steak because they have the demand for it. The cost can vary depending on the size of the steak and how long it has been dry-aged, but dry-aged steaks can start at around $80 and can cost as much as $150.

Can I Dry-Age Steak at Home? 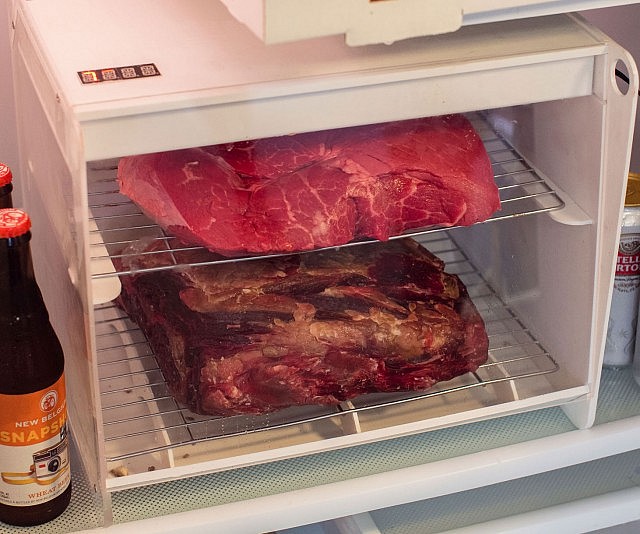 It is possible to dry-age a steak at home. Because the dry-aging process does need to be tightly controlled in order to avoid bacteria getting into the meat, it’s important to make sure that your refrigerator stays below 40 degrees Fahrenheit. Home fridges are often more variable than the commercial meat lockers businesses would have.

Steaks can also be dry-aged in vacuum-sealed bags. These are special bags designed specifically for dry-aging. The material of the bags bonds with the proteins in the meat, which allows moisture to escape. At the same time, the meat is protected from contamination.

For added tenderness only, the steak should be dry-aged for 2-4 weeks. 4-6 weeks will produce the expected dry-aged steak taste. 6-8 weeks or more will result in a much more funky taste.

How Long Does it Take to Dry-Age a Steak?

The dry-aging process can vary, but the longer the steak is aged, the more flavorful it is. At steakhouses, the most commonly requested length is 30 days. If the meat isn’t aged for as long, it won’t be as tender or as flavorful. Rarely, steak can be aged up to 120 days, but only a few high-end steakhouses offer steak aged for that long because the flavor by that time is very intense and funky.

Dry-aging steak is perfectly safe so long as it’s done properly. Commercially dry-aged steaks are done by meat-packers that have certified facilities to control the aging process and ensure that the meat doesn’t go bad while it ages. Dry-aging steaks at home or in-house at a restaurant, where the facilities might not be up to the task of safely dry-aging a steak could be more of a risk.

Some microorganisms will be present on the dry outside of the beef, but this section will be cut away. If the dry-aging has been done properly, the microorganisms wouldn’t have been able to reach into the inner meat that’s used for the steaks. Any additional microorganisms would be killed in the cooking process. If dry-aging has not been done properly, the meat would have a recognizably bad smell and if it was eaten, there’s a risk of food poisoning because even after cooking some bacteria, such as salmonella, and their toxins can survive the cooking process.

How Do You Age a Steak Without it Going Bad?

The dry-aging process involves tightly controlling the conditions of the meat and the levels of moisture and bacteria that are allowed. The temperature of the refrigerator is also highly controlled. If it’s too hot, the steak will begin to go bad, but if it’s too cold, the meat will freeze and the aging process will stop.

What sides, sauces, seasonings, and wines to pair with your dry-aged steak depend upon your taste, but we have some suggestions to help bring out the natural flavor of your steak. Because a dry-aged steak is so flavorful, it should be allowed to take center stage in your meal.

What Spices Are on Dry-Aged Steak?

Dry-aged steak is so flavorful it usually doesn’t need much in the way of spices. Small amounts of olive oil, salt, and pepper can be used to avoid overpowering the taste of the steak.

Sides that go well with dry-aged steak are potatoes, mushrooms, and vegetables. These pair well with steak and won’t overpower the taste of the delicious dry-aged steak.

A common wine choice for dry-aged steak is a Cabernet Sauvignon because it has a strong flavor to match the strong taste of the steak. The protein of the steak pairs with the tannins of the red wine, dampening the bitterness of the tannins, and fully activating the flavors of the wine.

Other good wine options include Malbec and California Zinfandel, both of which are strong red wines with high levels of tannins.

What Cuts of Meat Are Best Dry-Aged?

Dry-aging is usually done on the following cuts of beef:

These tend to age well and will have a much-improved flavor after the aging process.

The most popular beef for dry-aging comes from the following cows:

Can Other Meats Be Dry-Aged?

The dry-aging process requires larger cuts of meat because so much has to be cut off when the process is finished. Therefore, red meats are the only ones really eligible for the process. White meats and seafood wouldn’t necessarily benefit from the dry-aging process. Typically it is only beef that is dry-aged, but it is possible to find dry-aged pork.